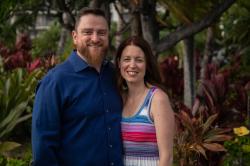 Alex Fitzgerald was on track to live the typical American life: he graduated from college, got married and was about to enter the workforce. NAA President and Chief Executive Officer Andy Albright convinced him to do otherwise. After working with Albright in numerous ventures, the two finally paired up again with NAA. Fitzgerald moved from Burlington, N.C. to Dallas, Texas in 1999, and he joined the NAA team in September 2002 shortly after the company started. “I’ve been working around Andy for half of my life,” Fitzgerald said. “When he said that he was forming a company that could be our own, I was instantly in. There was no question and no hesitation about that.” After over a decade with The Alliance, Fitzgerald is one of the company’s brightest stars – easily earning more than $1 million annually. “Fitz” and his wife Heather reside with their three children in Dallas, Texas. Despite being The Alliance’s top earner, “Fitz” says the best has yet to come. “I want to be the best that I can be,” Fitzgerald said. “We want to be leaders of leaders.”

Our mission is to provide the best financial products with the kind of in-home, professional service that is second to none. Our operating credo is: "Your clients don't care how much you know until they know how much you care." We take a personal interest in each and every one of our clients. We believe that knowing our clients' wants and needs is the foundation to recommending the best financial strategies that will provide exactly what each client wants.